24 hours after the merger, ETHW Core will continue to advance the Ethereum PoW fork

ETHW Core plans to split from the main ETH blockchain and maintain a PoW version to keep ETH mining alive after The Merge.

The long-awaited Ethereum merger is just around the corner, but not everyone is excited about the major upgrade. A group calling itself ETHW Core has voiced its opposition to the change and will hard fork within 24 hours of the merger.

Under the project name ETHPoW and the token ETHW, ETHW Core plans to separate from the main ETH blockchain and maintain a PoW version to keep ETH mining alive after the merger.

“The ETHW mainnet will happen within 24 hours of the merge. The exact time will be announced via a countdown timer 1 hour before launch, including final code, binaries, configuration files, node info, RPCs, resource managers, etc. Everything including will be made public when the time comes,” the group wrote in a Sept. 13 tweet.

The merger will transform the Ethereum network from its current proof-of-work (PoW) mining model to a proof-of-stake (PoS) consensus mechanism, phasing out miners and replacing them with validators.

In their Aug. 29 open letter explaining their motivations, the group outlines why they believe “PoS is indeed a game-changer, but only in a bad way.”

“It is prudent to continue PoW Ethereum, and for those who embrace open and free markets, it should be taken for granted, as there are no downsides. After all, if PoS Ethereum is really that great, why fear competition? “

However, many in the community believe that the fork was driven by money rather than ideological differences.

And serious concerns have been expressed about forking ChainID and whether it would increase the risk of replay attacks and other hacks.

Former Ethereum Foundation member Hudson Jameson wondered on September 8 why it launched after the actual merger. 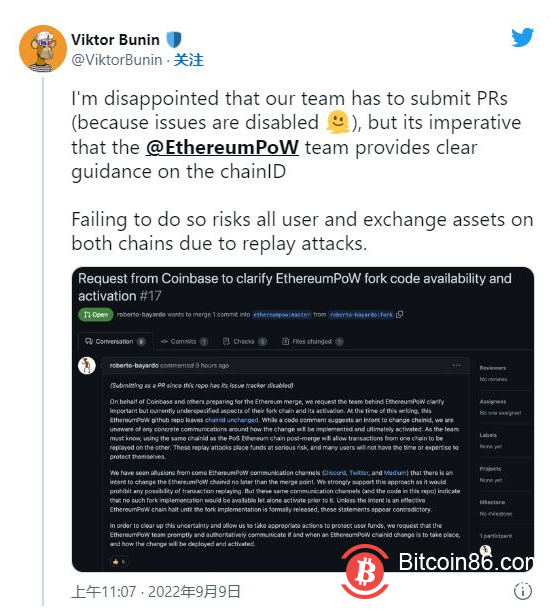 If all goes according to plan, the ETH merger is currently less than a day away.

At the time of writing, the ETHPoW token is trading at $29.71, but exists only as a futures code, conceived in anticipation of the upcoming fork. The price of Ether (ETH) is currently at $1,599, down 2.26% over the past seven days.

On June 24, Convex Finance, a one-stop platform for CRV staking and liquidity mining, tweeted today that Convex Finance’s DNS was hijacked, prompting users to approve malicious contracts for some interactions on the site, verifying the funds of the contracts Not affected.…
Read More

Talking about money: ETH stepped back to support the short-term stop profit and successfully grasped the bottom. Pay attention to the trend of the upper pressure level for a breakthrough in the day!

Every day, I will publish my personal suggestions in the real offer group, grasp the key points, control the position, and grasp the trend. It is mainly for spot goods, contracts, good at trend layout, and operates around short-term bands, mid- and…
Read More